Available wherever books are sold. Including: 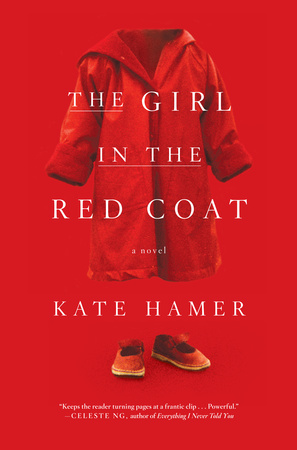 Newly single mom Beth has one constant, gnawing worry: that her dreamy eight-year-old daughter, Carmel, who has a tendency to wander off, will one day go missing. And then one day, it happens: On a Saturday morning thick with fog, Beth takes Carmel to a local outdoor festival, they get separated in the crowd, and Carmel is gone. Shattered, Beth sets herself on a grim and lonely mission to find her daughter, keeping on relentlessly even as the authorities tell her that Carmel may be gone for good.

Carmel, meanwhile, is on a strange and harrowing journey of her own—to a totally unexpected place that requires her to live by her wits, while trying desperately to keep in her head, at all times, a vision of her mother … Alternating between Beth’s story and Carmel’s, and written in gripping prose that won’t let go, The Girl in the Red Coat—like Emma Donoghue’s Room and M. L. Stedman’s The Light Between Oceans—is an utterly immersive story that’s impossible to put down . . . and impossible to forget.

In your own words, what is The Girl in the Red Coat about at its core?

I read something once that was along the lines of---all books about missing people are crime novels, but they are also love stories. I think that’s very true of this book. At its core, it is about love, specifically the love between mothers and daughters, which I think is quite an unexplored relationship in fiction. That’s the basic answer. There are other important layers there aside from that---for instance, healing. For me, every single one of the characters in the book is trying to move themselves to a place of healing, although many of them are doing it in a terrible, messed up, destructive way.

Did you always intend to write a multifaceted story, or did certain elements develop during your writing process? How did you make sure these elements complemented each other, and didn’t compete for the reader’s attention?

I had the basic plot from very, very early on---it arrived at the same time as Beth and Carmel, the two main characters. I also knew the ending. In fact, I wrote the last paragraph around the same time as the first few chapters. I think this is emerging as the way I work. I’ve done the same thing for the book I’m working on at the moment, so I know exactly where I’m heading even if I’m not quite sure what I’m going to encounter along the way.

The bones of it were always there, but as I was writing complex layers began to emerge quite naturally. What or who do we believe in? What is healing and why do we seek it? How can ego be such a destructive force (Gramps)? How do you hold onto identity when everything has been blown apart? I’m glad you felt these elements worked together. Perhaps it was that I tried to always keep that core relationship in mind---Beth and Carmel and everything else is a facet of that. I think of it a bit like a ring---everything else functions as a stone embedded in that setting, so hopefully that acts as the anchor for the whole book.

From where did you draw your inspiration for the otherworldly components?

In your longer question you mentioned the relationship to fairy tales, and it’s really interesting that they’re part of your literary landscape, too. I also grew up on a diet of fairy tales, however they were not ‘sugary-sweet’ by any stretch of the imagination. My mother was a second-hand book nut, and among the books we had were many children’s books, including Victorian classics such as The Water Babies, Treasure Island, and an ancient copy of the Brothers Grimm tales. Because this was a different era, they must have been quite close to the original stories (I still have the book). Murder, crime, jealousy, revenge are all part of the staples, and I drank them in!

Certain stories, such as Hansel and Grethel, are absolutely terrifying---Hansel has to poke his fingers through the cage for the witch to check if he’s plump enough for the oven! These books spared children’s feelings a lot less than their contemporary equivalents might, so I was exposed to the “dark version” early on. The “other world,” where magic and extraordinary events occur, is given an equal weight. I think that had quite a profound effect on me. One of the influences on the book was Little Red Riding Hood. On a basic level, that’s sort of who Carmel is---she strays off the path and becomes lost and menaced by the wolves of this world.

How long did it take you to develop these two characters (Beth and Carmel), and how did you approach creating them?

Carmel---the image of her---came first, so when it started writing the first chapter, it surprised me somewhat that it was in Beth’s voice---Beth talking about her daughter, missing her, conjuring up memories of their time together. It sounds crazy, but it’s almost like they developed themselves once they were on the page. I didn’t have a hard time envisaging them. If anything, the challenge was with Carmel’s character. She’s a child, but I didn’t want her to sound too babyish or childlike because she has such strange, extraordinary qualities. Also, I didn’t want to patronise her. It was a question of getting the voice right for the age, while bearing in mind that she is a thoughtful child with pretty strong opinions of her own! This involved some tweaking---taking out the odd word if I decided it might not feature in an eight year old’s lexicon, without bowing down to the notion of making her a stereotypical child’s voice.

What’s the greatest challenge that you faced while writing the novel?

In all honesty, it was near the beginning of writing the book. It was taking the decision to stick to my original vision of the story. When you’re writing your first novel, you are essentially writing into a vacuum, which has its joys and its difficulties. There is a great deal of freedom, but it’s easy to question what you’re doing. Should I do this or that, or be writing to the market---that sort of thing. Once I’d made the decision that this is the story I really want to write, the one that’s burning inside me, I began to breathe easier and just got on with it. It was very liberating.

What made you want to apply your talent to writing a mystery in particular?

I’ve always loved the edge of experience, the unknown, books that send a shiver down your spine, but at the same time keep you reading because you want to find out how it all ends. I just naturally gravitated towards that sort of story. I really like the genre term of mystery, too. It sums up the sort of book I love---even if the mystery is just the relationships that have to be unravelled. The writers Helen Dunmore and Maggie O’Farrell are both particularly skilled at this.

Are there any particular authors who have influenced you as a writer?

Probably every author I have ever read! Some of my favourites include Hilary Mantel, Nicole Krauss, Graham Greene, Maggie O’Farrell, Kazuo Ishiguro, M.L Stedman, Stephen King. I love the gothic quality and sweep of Donna Tartt. I read Gillian Flynn and Lionel Shriver for their sheer edge of the seat qualities, plus the fact they never just go with convention. If I had to choose just one I think it would have to be Ian McEwan. He writes like an angel, and you never know what he’ll come up with next.

What are you reading right now?

Shirley Jackson’s The Haunting of Hill House. Apparently, it’s mega-famous in the States, but I only picked up on it hearing how many writers, like Stephen King, have been influenced by it. So far it’s very promising!